Where is D.H. Lawrence buried? 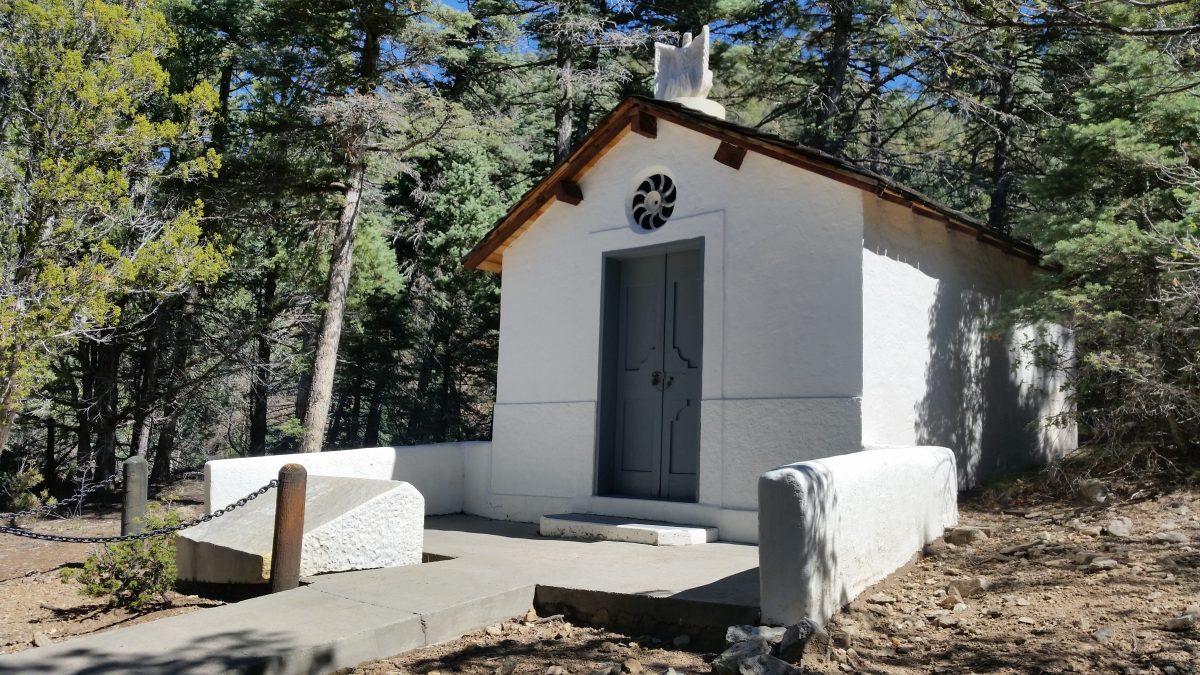 D.H. Lawrence was a sickly child. He was affected quite badly on his chest throughout his life, suffering from recurrent pneumonia. This illness would cut his career short, not only at the J. H. Haywood’s surgical appliances, but also teaching in Croydon.

In 1925, Lawrence received the devastating diagnosis of tuberculosis, and was given only 2 years to live. He would go on to live for 5 years, exceeding not only his doctor’s diagnosis, but also that of his mother’s pessimistic prediction. Lydia Lawrence believed that her son would not live beyond his teens.

Between his diagnosis and eventual death, Lawrence wrote and privately published Lady Chatterley’s Lover in Italy and France. It would go on to be banned in the UK, not being available until 1960, following the Obscenity Trial. He also had an art exhibition in the Warren Gallery London, where 13 images were seized by the police for being obscene.

The death of a literary genius

Following a short stay at the Sanatorium Ad Astra in Vence, South of France, Lawrence discharged himself on 1st March. He passed away only a day later at the Villa Robermond, on 2nd March 1930. Buried on 4th March in Vence Cemetery, his funeral was attended by his wife, Frieda, and friends. Mourners in attendance were novelist Aldous Huxley, poet Robert Nichols, and Edward Titus. Titus published Lawrence’s infamous novel, Lady Chatterley’s Lover, in Paris in 1929. (Lady Chatterley’s Lover was originally published privately in Italy in 1928, by Guiseppi “Pino” Orioli.)

In 1935, five years after his death, Frieda had Lawrence’s body exhumed. The aim was to bring his ashes to New Mexico, for his final resting place at their ranch near Taos. Frieda gave this task to her third husband, Angelo Ravagli.

There is a lot of mystery surrounding the fate of Lawrence’s ashes. Is he reburied within the concrete shrine of his Kiowa Ranch, New Mexico? Following Frieda’s death, Angelo announced that he “threw away the DH cinders”, somewhere in the Mediterranean. He returned to New York with an empty urn. It is suggested that he wanted to avoid the administrative and financial cost for transporting Lawrence’s remains. The urn was refilled with wood ash and passed off as the notorious author, which was buried at the ranch.

On display at Lawrence’s shrine in New Mexico is an official certificate that the urn Angelo transported contained Lawrence’s ashes. Which story do you believe? 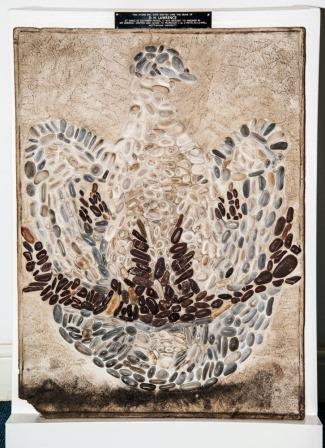 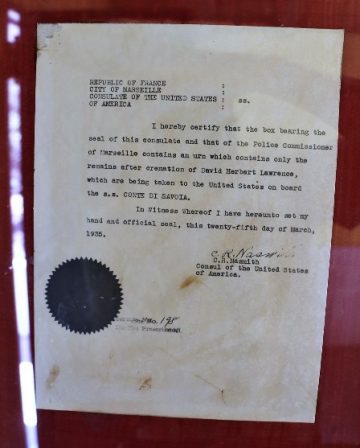 The grave stone design, commissioned by Lawrence’s wife Frieda, was a phoenix design with no text on it, not even Lawrence’s name. It was designed and made by artist Dominque Matteucci. After Lawrence’s body was exhumed in 1935, a local English resident, Martha Gordon Crotch, retrieved the abandoned grave stone. She had been present at the exhumation of Lawrence, at the request of Frieda.

Martha became well-known in Vence, especially within the expatriate community, as well as literary and artistic circles, known fondly as ‘Auntie’. Martha befriended Frieda towards the end of Lawrence’s life. She looked after, and displayed in her shop, the 13 paintings Lawrence produced that were seized 1929.

It was given to Eastwood Council in 1957, where it was put on display in Eastwood Library. It found permanent residency at the Birthplace Museum in 2008.

The D.H. Lawrence Birthplace Museum is open from Tuesday to Saturday, in Eastwood, Nottinghamshire. Visitors are transported back in time to view the authentically restored Victorian miner’s cottage, home of the world renowned author. The Museum can be explored via guided or self-guided tours.

To celebrate the launch of our new self-guided tour, the Museum is offering free entry for all Broxtowe residents. To claim your free self-guided tour of the Museum, please bring proof of address. Come experience the humble beginnings of this literary legend. Self-guided tours are available Tuesday-Saturday, 12.00pm-4.00pm (last admission at 3.30pm); no booking is required.

Many thanks to David Moakes for the photos of D.H. Lawrence’s shrine in New Mexico.