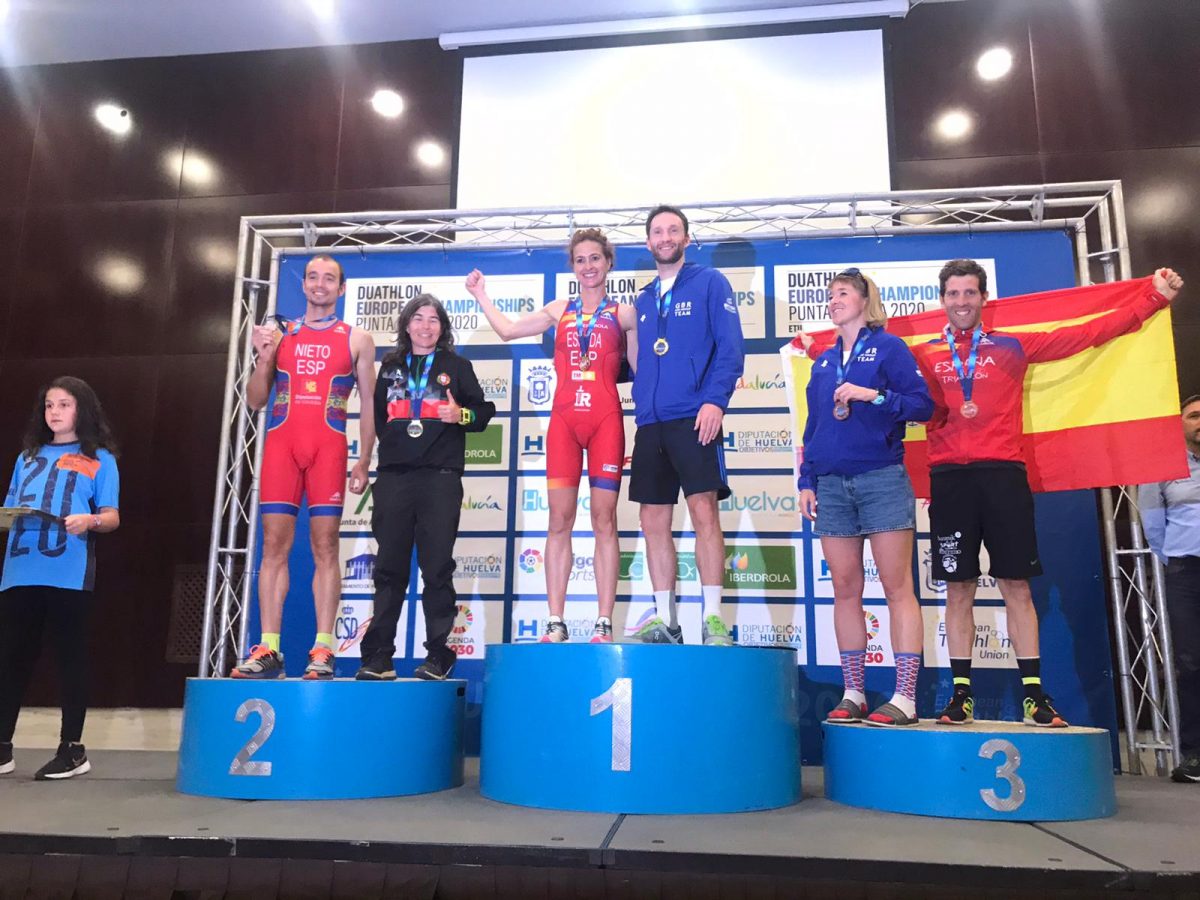 The 2020 European Sprint Duathlon Championships took place in Punta Umbria, Spain. This isn’t a place many people may have heard of but it did ring a bell with me; as I was aware that the town hosted the World Cross Country Championships in 2011.

This sparked my interest; I wanted to go and take part. I needed the chance to defend my sprint title won in last year’s Championships in Targu Mares.

Qualification for this event was fairly straightforward. Claiming a top 3 finish in the 2019 event gave me an automatic pre-qualifying place. This gave me both confidence in my ability and the freedom to focus on the Championship event; without having worry about travelling to a qualifying race in the UK.

Competing in two races (sprint and standard distance) within 48hrs, made the logistics of travelling more difficult. Setting up two different bikes before race day was a bigger challenge than before. The Sprint race is a draft-legal race, which requires the use of a road bike. The Standard distance race is a non-drafting race; therefore it is more beneficial for athletes to ride a Time Trial bike. This is due to the rule of having to maintain a gap of two bike lengths between riders.

The journey to Punta Umbria wasn’t the easiest. Travelling with two bikes and a suitcase from East Midlands airport to Faro attracted a few puzzled looks!. I heard one woman say she thought I had a tuba inside the box! Once the airports were out the way, it was a 2 hour drive from Faro to Punta Umbria. Upon arriving at the hotel, it was just a case of unpacking the bikes and registering for the race. Cutting it fine, I registered at the team hotel with just 30 minutes to spare.

My race pack consisted of:

I had time to complete a recce of the cycle course route and attend the opening ceremony; which consisted of a street parade of all the nations taking part. Once my road bike was safely assembled and serviced I rode out onto the course to check it out. The temperature was around 21 degrees and sunny (a nice change from the wintry weather I’d left behind in the UK!). The terrain was fairly flat – the road surface was immaculate! There was only a gentle head wind before the turn around point, which became a tail wind on the return.

A 5.30am alarm sounded for breakfast and there was time for a few finishing touches to the bike and applying the decals to my arms and legs. The race start was 9am. I left the hotel at 8am and rode less than a mile to the transition area to rack my bike and get kit checked over by the technical officials. Arriving early gave me time to warm up, stay hydrated and get myself on the start line without any problems. Athletes were funnelled down to the start line in age group order, with the traditional Triathlon Union drums playing in the background, which get the nerves jangling.

After a fast pace from the gun, the first run of 5km started to unfold. After a mile of running, lead out by 3 Spaniards and a Frenchman, I managed to latch onto the back of this group; hoping to go into transition close enough to hang on to them onto the 20km bike route. Unfortunately, I found myself down in 4th but I couldn’t close the gap of a few seconds. I was working hard, dragging another Spaniard and the Frenchman along with me. I hoped that we could work towards the leaders but were instead caught by a large group of riders. Going into transition I found myself in around 10th place and had to rely on my London Marathon training fitness to get myself back into medal contention.

The final run was 2.5km and a podium position was at least 30 seconds ahead of me. Approaching the final mile of the race I managed to claw back a few places up to 3rd and I had the leader in sight. Although I was catching up quickly, the finish line came a little too soon and I had to settle for Silver. Not a bad performance but I was disappointed it wasn’t the gold medal result I was expecting of myself. Luckily, I had another role of the dice the following day in the Standard Distance Championship race, which could make up for missing out today!

The same routine followed; except I decided to sensibly eat my breakfast with a bowl and spoon instead of tipping oats directly into a yogurt pot! To my advantage, I had a more relaxed approached to this race, having already raced on the course. The only difference was that each section was double the distance and it wasn’t draft legal, so the ride was more like a time trial. Two teammates were staying in the room across from me so we rode together down to the transition area to rack the bikes.

I found myself answering a few questions from other athletes who knew I’d raced the day before. Many of them thought I was crazy for racing on two consecutive days but I felt good and had confidence in my fitness and strength. Going into the starting funnel, I made sure this time that I was on the front line, as on the previous day I had to fight my way to the front. The familiar drums were playing again.

This time feeling a little more relaxed, I could see the British team manager watching from the side, acknowledging me, seconds before the gun fired. Another strong pace was set out by a Frenchman, who I was aware had run 66 minutes at Barcelona half marathon only weeks before. Taking into account my own personal best is 68 minutes, I managed to finish the 10km run only a few seconds down going into transition. Performing a swift transition, I managed to head out in the lead, creating a gap of at least 5 seconds. With 40km to ride on tired legs, anything could now happen.

I managed to hold the lead for 30km of riding, before the Frenchman overtook me and then another Brit taking me down to 3rd. Unable to draft behind the riders, I had to position myself to the side or hold back two bike lengths. I was able to keep myself in close contention going into the final transition. I again had a quick transition, going out in 2nd place, with the Frenchman on my coat tales. We quickly closed down the other Brit, leaving the final 5km run a closely fought battle. Despite struggling to keep to the Frenchman’s fast pace, I knew I could rely on my speed if I were able hang on until the closing stages.

Going into the final bend I took the inside line, which worked to my advantage; propelling me onto the blue carpet finish. It came down to a straight shoot out, my hamstrings were screaming but I managed to push for the line and hang onto for a Gold Medal and my second podium finish of the Championships!