Small in size, large in stature 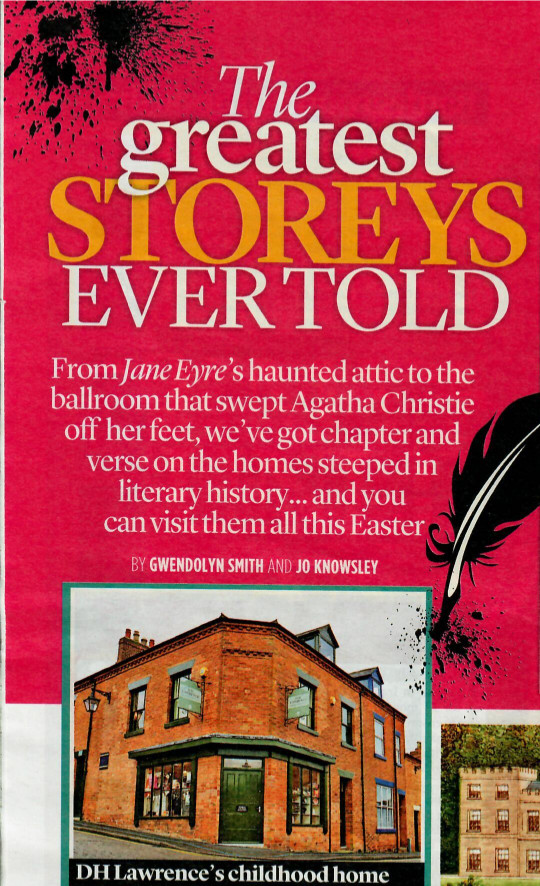 At least that’s what D.H. Lawrence seemed to think.  Perhaps then it shouldn’t be surprising to see his birthplace alongside Arbury Hall, Wilton House and Lytham Hall in an article on literary houses.  Recently the Daily Mail ran this article in their ‘Event’ supplement on days out at country houses with enchanting literary connections, click here to read the article.

Seeing the D.H. Lawrence Birthplace Museum alongside some pretty fancy country estates has been great coverage for us and has brought in a whole new raft of visitors.

Used as a temporary theatre by Shakespeare which also appeared in the TV series ‘The Crown’ starring Claire Foy.

Amidst these and other national treasures sits Lawrence’s birthplace, the two-up, two-down miners’ cottage nestled in the red-brick buildings of Eastwood, Nottinghamshire.

I suppose what makes a literary house enchanting is not size or grandeur, but the sense of place which great storytelling can capture. I know that in this respect the D.H. Lawrence Birthplace Museum is equal to John Keats’ ‘love nest’ or Sir Walter Scott’s ‘fantastical fortress’.  Lawrence wrote about Eastwood and the mining community. He was arguably the first British writer to be writing about working-class experience from such an authentic perspective.  To visit his birthplace and the surrounding countryside is to gain a tangible and physical experience of the world he repeatedly portrayed.

Lawrence’s origins are so integral to his life story . They shaped the kind of writer he would go on to become. His choice of career made him an outsider to the mining community and he even found his choice of vocation faintly ridiculous himself; he stated, “But what will the others say? That I’m a fool. A collier’s son, a poet!” (Worthen, 1992, p.130).  He went on to be successful and to develop friendships with other writers. His working-class origins meant that he was never fully assimilated into the upper-class world he associated with.

It was precisely this outsider status which gave him an objective view of the whole class system. This was the man who eloped with Frieda Weekly (nee Von Richthofen), the descendent of German aristocracy.  This was also the man who developed intimacies with handsome young farm-hands.  And it goes without saying that his novel Lady Chatterley’s Lover was the clarion call of love across class boundaries.  His message is truly emotionally egalitarian and so it is only fitting for his birthplace to have top billing with other literary houses.

Come and experience an immersive biographical tour at our award winning museum.